How the Tool Library Came To Be

Tool libraries have been developed in many communities all over the globe as part of a movement toward shared consumerism.  The goal is to cut down on over-use and waste of resources by sharing valuable items that are only used occasionally, rather than buying everything that is needed.  For an excellent discussion of tool libraries and their rationale, see the Youtube video

Tool libraries — we are richer when we share | Lawrence Alvarez | TEDxMuskegon

The idea for the Vashon Tool Library was sparked about 2010 by Steve Graham, Tim Baer and Terry Sullivan, through a series of visionary Transition Vashon meetings and book club events.  After several years of preparation and groundwork, Steve applied for a 2014 King County Community Service Area grant that supported the initial efforts at acquiring tools, a usable library space, and developing a website and social media presence. The library opened in late 2015 and has proved enormously popular with islanders.  It now has over 500 members, a large and growing tool collection, and popular classes and workshops, as well as supporting the Vashon Fixit repair cafes.

The Vashon Tool Library is a program of the Vashon Makerspace,  a non-profit 501c3 corporation which is registered with the IRS (EIN 81-3503206).  Donations to the library are deductible as prescribed by law.

Join our Google Groups email list, to receive infrequent updates and  notifications of updated policies or new tools available. Send an email to [email protected] to join the group.

Email us at [email protected] to learn more, donate funds, or to volunteer time and tools. 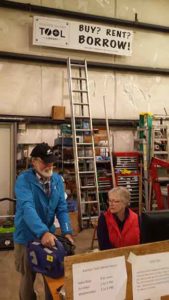